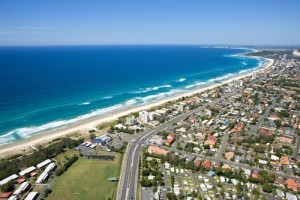 Palm Beach is located around 15 kilometres south of Surfers Paradise, midway along what has been described as the Gold Coast`s most scenic stretch of beach.

The low-lying dunes and vast expanse of white sandy beaches, together with close proximity to the natural waterways of the Currumbin and Tallebudgera Creeks, have resulted in a high number of homes with spectacular water views.

There is a myriad of property types in the area; from high-rises to duplexes, renovated family homes to short-term holiday accommodation, and luxury multi-million-dollar mansions to original fibro housing from 30 to 40 years ago.

Historically, the suburb has attracted a large number of retirees seeking a relaxed, sunny sea change and when compared to the rest of the Gold Coast this still seems to hold firm. However, Palm Beach has become increasingly price-driven over the past decade in particular, with a significant increase in the number of younger families and childless couples in the area.

A stylish, contemporary atmosphere is burgeoning and in recent years the area has expanded to include new subdivisions, including a small section of canal development. Palm Beach is now one of the most densely populated areas of the Gold Coast.

A number of sports stars and television personalities are rumoured to have bought at Palm Beach. Prestigious Jefferson Lane, with its absolute beach front, has become renowned as a “millionaire`s row” and one of the Gold Coast`s best streets.

The suburb`s location between the Gold Coast Highway and the Pacific Motorway make access to these major roadways fast and easy. The Gold Coast Airport at Bilinga is a five minute drive away.

Palm Beach has nine parks covering nearly 13% of the total area. The Gold Coast City Council has also recently undertaken the Palm Beach Protection Strategy in response to concerns about the ability of these dunal areas to provide an adequate buffer during storms.