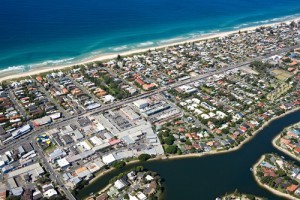 Well known for its wide beachfront and close proximity to some of the Gold Coast`s top attractions, Mermaid Beach is a residential only suburb that has long been sought after by property investors.

Mermaid Beach is home to families and retirees who have lived on the coast for many years; and it is not uncommon to see residents walking or exercising on the beachfront a few streets away.

One of Mermaid Beach`s most expensive streets, Hedges Avenue, which later turns into Albatross Avenue, is regarded as one of the most desirable addresses in Queensland. A Hedges Avenue home sold in September 2004 for $18 million, breaking the previous state record for a house and reaffirming the Gold Coast`s status as one of Australia`s hottest property markets.

Hedges Avenue itself is a small, one-way street set at 40km speed limit, with homes that are both expensive and impressive due to the absolute beachfront location continuing to drive prices skywards. It is reasonably quiet and relaxed, despite the busy Gold Coast Highway and shopping centres of Broadbeach nearby.

Town-planning also restricts new apartments and developments` height levels, ensuring the suburb is not overcrowded with high-rises. This, evidently, has made it even more exclusive.

Most people who live in this suburb are attracted to the beach culture with a lifestyle that involves surfing and other water activities. It also has an active Surf Life Saving Club to patrol the beaches and provide activities to be enjoyed by both locals and tourists.

The high calibre of this location is reflected in the median house price, which has come in in at over $1 million in past years, compared with the relatively modest median for the rest of the Gold Coast.