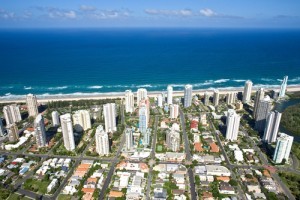 Main Beach is the centre of the Gold Coast social scene, with the busy little retail and dining strip on Tedder Avenue as the place to be seen.

Not only do locals enjoy the cafe culture of Tedder Avenue, but it is also a popular hangout for visiting international and Australian celebrities, with many a famous face and expensive sports car spotted along the renowned restaurant strip.

Main Beach was the talk of the town early this year (2005) when a humble two-storey beach shack on 963 square metres of prime Main Beach beachfront sold to a mystery buyer for $13 million moments before it was due to be auctioned, in what is thought to be a record for a Queensland residential property.

Many wealthy personalities and retirees own second residences at Main Beach – further evidence of the desirability of this location.

With the Pacific Ocean on one side and the Nerang River Broadwater on the other, this suburb has no more room to expand which explains the premium price tags attached to Main Beach properties.

The median house price for Main Beach rose by 194.4 per cent in the five years to March, with the year to March recording a median of $1,325,000 – considerably higher than the wider Gold Coast`s median of $345,000 for the same period.

Units and townhouses have also grown in value, climbing by 53.8 per cent in the five years to March. The median price achieved for a unit/townhouse in the March quarter was $458,750 – again ahead of the wider city`s median of $260,000.

Main Beach recorded a rental yield of 3.4 per cent for units and townhouses over the March quarter, less than the Gold Coast`s rental return of 4.8 per cent.

According to the 2001 Census, there were 30,416 people living in the Surfers Paradise region which includes Main Beach. The median age was 40, compared to the wider Gold Coast`s median age of 38.

Sea World is located at Main Beach, along with the acclaimed Marina Mirage shopping complex, Sheraton Mirage and the world`s first Palazzo Versace. North of Main Beach is The Spit where dune vegetation exists in its natural state.

Breathtaking views have been capitalised on by developers who have built a number of high-rises to the east of Tedder Avenue. However, high-rise development is prohibited to the west, with stunning homes, villas and townhouses featured here instead.