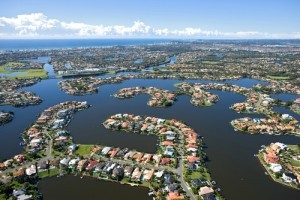 The suburb is surrounded by an extensive artificial lake and a majority of homes in Clear Island Waters offer spectacular water views and are very generous in size.

The suburb is divided into three distinct areas, which are linked by a network of separate roads and bridges across the waterways:

Island Quays, in the northern part of the suburb, predominantly features large water-front homes; The Moorings, in the south-west of Clear Island Waters, includes both wet and dry blocks; and homes located in The Capes in the suburb`s south-east corner have been developed in a more simple style, yet still enjoy a first class location.

The only local shopping complex in the suburb is located in Island Quays, although Pacific Fair — the second largest shopping centre in Queensland — and Robina Town Centre are within easy reach.

The gated communities of Isle of Istana, Clear Water Bay and Rhode Island feature heavy security and large homes. Rhode Island is dominated by stylish townhouses and features a range of excellent on-site amenities and surrounding parklands. Clear Island Waters also plays host to the Surfers Paradise Golf Club, and the Merrimac Golf Course is in neighbouring Merrimac. There is also a number of other parks and green spaces in the area.

Local primary education is available at St Vincent`s Primary School. All Saints Anglican School is in the neighbouring suburb of Merrimac, and the prestigious St Hilda`s School at Southport is 8.5km to the suburb`s north.